RAID: Shadow Legends features many different adventures for players to take part in. With so many ways to enjoy your time within the game, getting a handle on where to find a specific gameplay experience can often feel overwhelming.

Fear not, though. In this article, we will walk you through RAID: Shadow Legends’ top-level gameplay mechanics and explain the numerous game formats and styles found within the game.

Players will definitely want to spend some Gems and open the Mine at the Bastion. This isn’t cheap, but once you’ve unlocked the Mine, it provides a steady flow of Gems for the remainder of the player’s time within RAID: Shadow Legends. Unlocking and upgrading the Mine is a valuable long-term investment that pays for itself once you’ve invested 100 days into playing the game. After that, you’ll receive a steady stream of additional gems!

For adventurers looking to shore up their Champions by boosting their squad stats across certain Champion Affinities, this is the place to be. You can improve Champions in multiple areas, including defense, health points, and attack. In order to purchase these upgrades, you’ll first need to earn Arena Medals by participating in PVP battles.

Trade in your Silver for a selection of gear, Shards, and even Champions in the Market. The list of available sales refreshes every hour, and the number of items listed in your Market can be upgraded by making an investment of Silver or Gems.

The Portal is where players can crack open their Shards in order to summon new Champions to their army. It also allows them to fuse the Champions they’ve already acquired into rare and otherwise hard-to-obtain Champions.

The Sparring Pit allows you to improve your Champions’ levels without spending Energy. This makes it a great resource for adventurers who wish to upgrade essential or favorite Champions in the background while focusing their attention elsewhere.

As a hands-off leveling tool, the Sparring Pit is your best means of earning experience while you’re away from the game or simply low on Energy. Like the Mine, Sparring Pit slot unlocks and upgrades make for worthwhile long-term investments.

Throw back a tankard of mead as you take your Champions to a whole new level in the Tavern. This is your one-stop-shop for improving your champions.

All of these actions, aside from ascension, cost Silver.

As an epic, turn-based MMORPG, RAID: Shadow Legends tasks players to take part in a lot of battles. These constitute the bread-and-butter of the game. In this brief gameplay guide, we’ll walk you through some of the basics of the battle system.

The Turn Meter is the core of combat in RAID: Shadow Legends. Appearing above every enemy and friendly Champion on the battlefield, you’ll see two bars.

The top green bar is a display of a Champion’s current Health Points (HP). The second bar is the Turn Meter. This yellow bar, which fills over time, is a visual representation of your Champion’s readiness.

Some Champion abilities can also modify speed rating through buffs and debuffs, add or subtract from the Turn Meter, or even grant extra turns!

Each Champion possesses a particular Affinity. Three of the four possible Affinities determine attack and defense advantages or disadvantages based on a simple rock-paper-scissors relationship, while the fourth element—Void—has no counter.

The most critical strategy to mastering all the battle scenarios outlined within this RAID: Shadow Legends Gameplay Guide is to become as familiar as possible with these Affinities and their counters.

Balance your Champions to guarantee that the right Affinities are always in play and in your favor. This can make the difference between winning a battle or losing it.

One of the most principles in RAID: Shadow Legends is the use of buffs and debuffs. These are effects that alter the performance of a Champion. Beneficial buffs can briefly improve a target’s stats or abilities.

Debilitating debuffs add a degenerative or damaging effect that reduces the target’s abilities in combat. Unlike buffs, a debuff will only stick if the target does not have the power to resist it—something determined by Champion’s Accuracy and Resistance stats.

Buffs and Debuffs are displayed near a Champion’s HP bar and are displayed in blue (for buffs) and red (for debuffs). At any point during a battle, you can tap on the INFO button at the bottom left and see all buffs and debuffs currently in effect on your squad.

In almost every scenario, players will be tasked with battling through three rounds of enemies in order to complete a level. This is true for both the Campaign Mode and the Dungeons. In other modes, like the PVP Arena and Clan Boss, you only have to complete a single round against another player’s squad or a Clan Boss.

After each round, buffs and debuffs are cleared, ability cooldowns decrease by a turn, and your Champions heal for a small amount.

For some, the tactics of battle are everything in RAID: Shadow Legends. Others players may be more enthusiastic about the progression and collecting aspects of the game. For this reason, Raid: Shadow Legends includes both Manual and Auto battle modes.

Auto mode allows the A.I. to handle all basic battle actions for you, though you can tap on a target during Auto battles to direct your entire team to focus on it. This is especially useful when grinding repeatedly through a single mission or battles for loot.

Manual mode, on the other hand, is the ideal mode to use for difficult battles. It allows you to take full advantage of the tactics your Champions bring to the table. Battles can also be played at normal (1x) or fast (2x) speed, allowing you to either enjoy the carnage or get through battles faster. 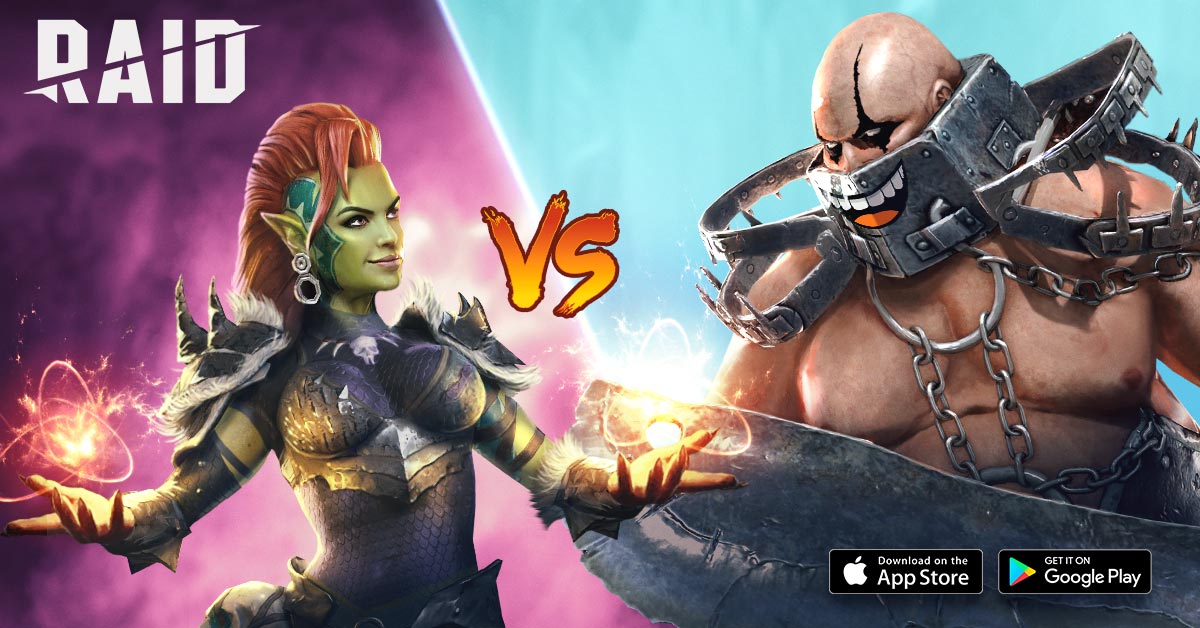 Here you’ll travel and battle through 12 campaign settings, each with dozens of stages to conquer, three difficulty levels to challenge, and plenty of loot to earn. Take a trip through a narrative that explores multiple factions, war, and betrayal, all while growing your own army of Champions.

Champions who do well in the campaign are those with high damage and low cooldown Area of Effect (AoE) abilities—this includes all the starter Champions.

If you take away anything from this RAID: Shadow Legends gameplay guide, it’s especially essential to note that grinding in dungeons is crucial to Champion growth.

Just be aware that this can be very challenging at times, as each fight requires players to make use of the correct tactics and combination of Champions. 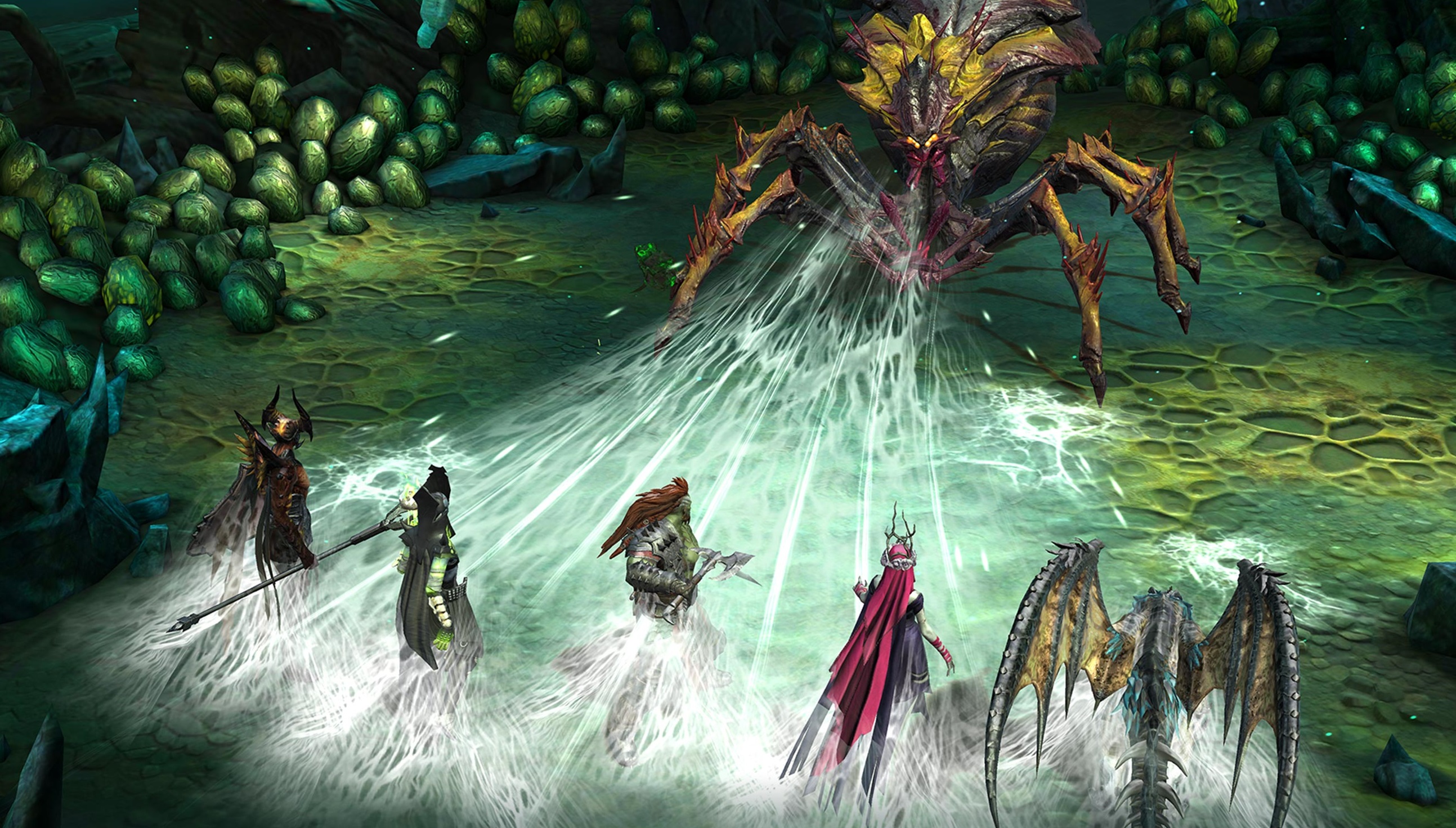 Part of the duality within MMORPGs is the fine balance between your ability to work with and against other players.

While Clans and Clan Bosses are perfect for players looking to work together, the Arena lets players pit their favorite squads against a vast array of other RAID: Shadow Legends players.

Arena Chests reset weekly, based on the final tier at the end of that week. Earned Arena Medals act as your currency here, so stack your squad and slay online to provide your army with the best overall boosts.

As part of a Clan in RAID: Shadow Legends, players can take part in battles against Clan Bosses.

These epic battles against gigantic foes are time-based cumulative efforts where players must bring their best to bear against monstrously difficult bosses. It’s all but impossible to beat these bosses in a single attempt.

All efforts from your Clan members will chip away at the HP of the Clan Boss, which has multiple tiers of difficulty and will change its Affinities from Void to a random non-Void alignment to unleash new attacks once it’s been reduced to 50% health.

In order to gain the best prizes, clans should aim to defeat the Clan Boss before the battle timer resets.

This will allow them to unlock more difficult tiers of the Clan Boss, as well as the improved rewards that go along with those more advanced challenges.

Faction Wars are coming to RAID: Shadow Legends! In this gameplay guide, we can only say that these specialty battles will force players to build their best squads within specific factions. No cross-faction team-ups will be allowed, so you’ll want to be sure to keep a stock of top-tier Champions from different factions in your army.

Faction Wars will be coming to RAID: Shadow Legends soon.

Now that we’ve covered most of the basics in this RAID: Shadow Legends Gameplay Guide, it’s our pleasure to send you into the wide and wild adventure that is RAID. Now get to collecting those Champions, grinding that gear, and participating in epic fantasy battles!