“As the last yellow leaf falls, ogryn tremble and flee to their homes”

As ancient ogryn legend has it, Gurgoh the Blizzard is an ogre-skinwalker half-breed rumored to haunt the Ice Golem’s Peak. Awakening with the first snows of winter, he is said to roam the foothills looking for ogryn children to feed to the Ice Golem.

“If you don’t eat your mutton, Gurgoh will come”, or “Do you hear Gurgoh knocking? He asks why you don’t want to go to bed.” – Every ogre has heard these words since childhood. Many would say that Gurgoh is just a bedtime story for children, but during the darkest winters, many ogryn young in the region do inexplicably vanish – leaving behind only empty footprints in the drifts below the peak.

To this day you’d be hard-pressed to find an ogre outside their hut in heavy snows, for all know that when a blizzard starts to howl, Gurgoh is near… 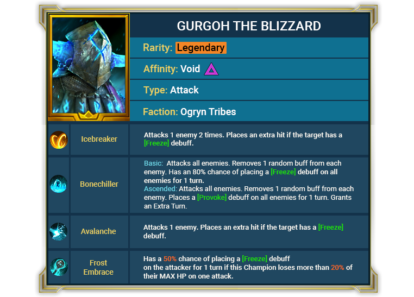 As Skinwalkers shaman tell it, at Ghaar Khan’s birth, divine signs indicated he would consolidate the scattered Skinwalkers clans into one horde. As Ghaar grew, he the truth of the prophecy was revealed.

By defeating his enemies, forming alliances, and winning the loyalty of others, he managed to unite or subdue the several great nomadic tribes under his rule. At the Council of Elders, he was acknowledged as “”Khan”” and gifted with a mace made of the Holy Sheep’s head – the Skinwalkers symbol of might and power.

Doompriest is a missionary of the Knights Revenant death cult. Her faith is strong, as is her command of the dark magic of K’leth. Like all priests, she dedicates much of her life to worship — but she derives her power not from prayer, but from dark ritual and sacrifice.

A lovely young girl when she first joined the cult, she now covers her face with a mask to ensure the docility of her victims. With each innocent soul sacrificed, her own bore the taint of her deepening evil and corruption. Her once beautiful visage has decayed with each step down this path, and is now a horror to behold.

A Crypt Guard is the reborn soul of a long-dead hero that has arisen from his grave and been trapped in the body of a sacrificed young adept of the K’leth cult.

No matter if it was a soul of a valiant knight or a ruthless warlord, once his soul is trapped in the body of the K’leth’s cult adept, it would be bound to serve evil. Some say that the barbarian tradition of burning of passed away warlords and chiefs was created in order to save their souls from this dark fate.

Ripper spent several years as a paid gladiator in the City of Ireth. Killing his enemies for the joy of the screaming crowd, he gained glory and fame as one of the most ruthless and deadly warriors in Teleria – until the day that he lost his first fight in the arena.

Broken and bowed, he bared his neck for the killing blow. But the blow never came – the elf who beat him declared him a worthy foe, spared his life, and even returned his weapon to him to that he might leave the field with honor, all in the face of the jeering spectators.

Truly impressed by the valor of the elf, Ripper offered him any boon he might grant. No one knows with certainty what was asked – only that the next day Ripper departed Ireth in the direction of the Dark Ravine, and that where Wanderer appears, Ripper soon follows. Some speculate this is his task – to seek out Wanderer and bring the traitor’s head to Queen Eva to repay the elven debt of honor.

In his past life, Daywalker was a common gravedigger in Kaerok. He lived his grim but ordinary life without complaint, until one day the corpse was brought to him of a lonely old man that had passed away in the slums abutting Kaerok Castle. The man had neither relatives nor acquaintances, nor coin to pay the Telerian priests to give the last rites.

Taking pity on the wretch, the young gravedigger took it upon himself to bury the man. Preparing the body for burial, he found a strange scroll in the man’s pocket.

Upon the reading, it was a dying man’s last wish to pronounce the words of a strange ritual over his body. Struggling with the unfamiliar glyphs, he spoke. The morning after, the young man left the Kaerok, and headed towards the Hallowed Halls.

His old name forgotten, his visage fell and terrible, he struck down all he met upon his path. The soul of Daywalker had found its newest vessel.

The Retainer is a fiercely loyal warrior in the service of one of the ancient and noble Dark Elven houses. Sworn to service until death or dismissal, he wields a blade crafted in the forges of Fire Knight’s Keep, and quenched in the blood of orcs – a blade he is honor-bound to fall upon should his Lord die in battle.

Like all in service to his master’s house, his armor and hair are dyed a bold azure – a sign of the unbreakable faith in his liege. A master swordsman, the Retainer also possesses the elven gift of hypnosis.

The Wanderer is one of the most infamous of all Dark Elven warriors. A silent fighter of awesome ability, skill, and cunning, before his fall from grace he had once served as Queen Eva’s personal bodyguard and – if the rumors are to be believed – personal assassin.

Those days have long since passed, and his story is now one of exile. Charged with the Queen’s safekeeping during the height of the wars with Kaerok, he abandoned his place at her side to seek out a legendary blade in the lands beyond the Dark Ravine. Said to cut even the strongest of tempered steel, it rests now at his side – but the price was dear.

The lands of Aravia and the road back to Darkwoord Forest are closed to him for his betrayal. With a price upon his head, his kin will not risk the Queen’s wrath to give him welcome. And so, he wanders Teleria endlessly, friend to none, a dark servant without a master…

In the complicated and byzantine hierarchy of the High Elves, promotion to elevated rank can take centuries. One faster step on the path to greater social rank is attaining the position of Magister. Even low-born Elven warriors willing to spend 50 years in services as a practitioner of battlefield healing magic can claim rights to this title. Those who do are valued greatly by their comrades in battle.

The ordinary ogre is not a very smart creature. In his natural state, an ogre is supremely incapable of learning magic or communing with spirits.
However, once every few generations, the ogryn race is blessed with the birth of a horned shaman. Bellower may be one of the last of these living in Teleria, capable of drawing upon the power of natural spirits to give bestial strength and cunning in battles against the many enemies of his kind.

Some ogryn tribes are deemed dangerously wild and primitive even by other ogres. Pounder is an outstanding representative of one of those extremely isolated and savage tribes found out beyond the Downward Hills.

As Pounder speaks a savage dialect unknown to most of his brethren, none know with any certainly much about his past, including even his real name – yet stories are told of a lone ogyrn matching Pounder’s description who survived a great drought in the Downward Hills by hunting and eating his fellow tribesmen. A great warrior, he’s given a healthy distance by his new ogryn companions, and an extra portion from the nightly stew each night, just in case…

Elven scholars have documented the sad truth that Skinwalkers have are becoming increasingly wild and feral with the march of time. Having lost almost all their magical abilities over the ages, more and more of this once glorious race have chosen the way of brute strength. Losing their human side, they are slowly becoming animals.

Bloodhorn exemplifies this trend in the latest generation of Skinwalkers. He is ruthless and brutal. He often loses his weapon on battlefields. But it doesn’t bother him much – his raw animal strength carries the day, and he walks away from each battle with his enormous horns covered in fresh blood.

Trained in the ranks of the elven rangers, Heartpiercer is a prodigy when it comes to using her bow to her advantage in battle. Though she could easily hunt any beast in Darkwood Forest, her defensive skills leave much to be desired. She is seldom found alone, and fights best with an ally at her side.